Verbs are also said to be either active (The executive committee approved the new policy) or passive (The new policy was approved by the executive committee) in voice. In the active voice, the subject and verb relationship is straightforward: the subject is a be-er or a do-er and the verb moves the sentence along. In the passive voice, the subject of the sentence is neither a do-er or a be-er, but is acted upon by some other agent or by something unnamed (The new policy was approved). Computerized grammar checkers can pick out a passive voice construction from miles away and ask you to revise it to a more active construction. There is nothing inherently wrong with the passive voice, but if you can say the same thing in the active mode, do so (see exceptions below). Your text will have more pizzazz as a result, since passive verb constructions tend to lie about in their pajamas and avoid actual work. We find an overabundance of the passive voice in sentences created by self-protective business interests, magniloquent educators, and bombastic military writers (who must get weary of this accusation), who use the passive voice to avoid responsibility for actions taken. Thus “Cigarette ads were designed to appeal especially to children” places the burden on the ads — as opposed to “We designed the cigarette ads to appeal especially to children,” in which “we” accepts responsibility. At a White House press briefing we might hear that “The President was advised that certain members of Congress were being audited” rather than “The Head of the Internal Revenue service advised the President that her agency was auditing certain members of Congress” because the passive construction avoids responsibility for advising and for auditing. One further caution about the passive voice: we should not mix active and passive constructions in the same sentence: “The executive committee approved the new policy, and the calendar for next year’s meetings was revised” should be recast as “The executive committee approved the new policy and revised the calendar for next year’s meeting.” Take the quiz (below) as an exercise in recognizing and changing passive verbs. The passive voice does exist for a reason, however, and its presence is not always to be despised. The passive is particularly useful (even recommended) in two situations:

The passive voice is especially helpful (and even regarded as mandatory) in scientific or technical writing or lab reports, where the actor is not really important but the process or principle being described is of ultimate importance. Instead of writing “I poured 20 cc of acid into the beaker,” we would write “Twenty cc of acid is/was poured into the beaker.” The passive voice is also useful when describing, say, a mechanical process in which the details of process are much more important than anyone’s taking responsibility for the action: “The first coat of primer paint is applied immediately after the acid rinse.” We use the passive voice to good effect in a paragraph in which we wish to shift emphasis from what was the object in a first sentence to what becomes the subject in subsequent sentences.

The paragraph is clearly about this new policy so it is appropriate that policy move from being the object in the first sentence to being the subject of the second sentence. The passive voice allows for this transition.†

The passive forms of a verb are created by combining a form of the “to be verb” with the past participle of the main verb. Other helping verbs are also sometimes present: “The measure could have been killed in committee.” The passive can be used, also, in various tenses. Let’s take a look at the passive forms of “design.” 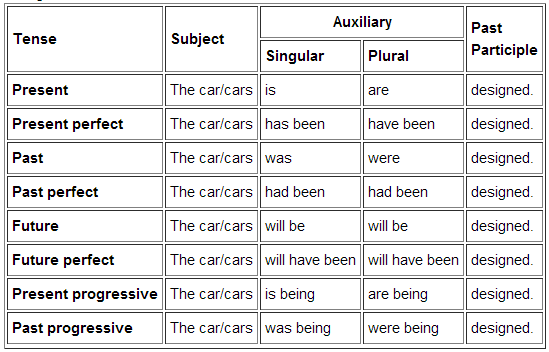